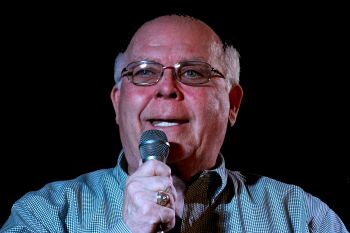 Most people would be happy being highly accomplished in just one walk of life, but Bill Coté has managed to find success in several. He is a successful businessman with a thriving real estate practice, a lawyer who is often called upon to serve as an expert witness, an adjunct professor at the University of California, Irvine … and a jazz singer with a gorgeous baritone voice and deep roots in the music world. His first album, “Where Do I Start,” has people wondering why they haven’t heard of him before.

Despite his considerable achievements in the business world, music has always been Bill’s overriding passion. Raised in Wyoming in a musical family, he began taking piano lessons at a very young age. It really all started with his grandmother, who played piano in movie theaters before “talkies” came about. In fact, the whole family could play an instrument and would often gather round to sing and play together. He loved the tunes in the Great American Songbook and the singers who covered those tunes, and that led him to further his musical education by taking voice lessons in his preteen years. He continued focusing on music throughout high school and college, where he appeared in various musical theater productions, such as “Annie Get Your Gun” and “Fiddler On The Roof,” in which he starred as Tevya.

Even the armed forces and a tour in Southeast Asia as a communications officer couldn’t quench his thirst for music and especially for jazz. When he was stationed in San Diego, he managed to find a supper club in the tony city of Coronado, right across the bay, where he would play the piano and entertain the customers in his free time away from the base.

When Bill was growing up, his family had very modest means, and after leaving the service, he knew he didn’t want to endure the struggles that musicians too often face trying to earn a living. So he went to school to study business administration and law, and graduated with an LL.B. degree from Western State University, College of Law.

Starting off his career first in sales and marketing , Bill gravitated to real estate and began collecting numerous professional designations while building a flourishing real estate practice in Newport Beach and , CA. But through the years, while growing his business and becoming a highly respected and successful entrepreneur, music was never far from his life. He listened to music all the time, attended many jazz concerts, and became good friends with several jazz musicians, including a close friendship with Vince Guaraldi, the pianist and songwriter perhaps best known for the Charlie Brown theme song.

But it was on a jazz cruise in 2010 that Bill’s longtime dream of making his own CD was re-ignited. It was on that cruise that he met piano great Tamir Hendelman, who is a regular with the Clayton-Hamilton Jazz Orchestra and has performed and recorded with the likes of Barbara Streisand and Natalie Cole, among others. They struck up a conversation, and, discussing Bill’s deep knowledge and love of the music, Tamir offered to accompany Bill on a tune. Tamir was blown away by his rich basso profondo voice and sure sense of swing. He strongly encouraged Bill to make his own recording, which was all the urging he needed. The result was the release of Bill’s first CD, “Where Do I Start,” in 2013 with Tamir doing the arranging and playing and accompanied by some of the finest jazz musicians in Southern California.

Today, Bill’s business is still thriving, and he is involved in various civic activities, such as serving on the board of the Regenerative Medicine Research Council, which guides the Stem Cell Research Program at the University of California Medical School, and working with the Police Department at California State University, Fullerton, where he helped start their Reserve Program to assist full-time officers. But he has still managed to find time to follow his true calling and is busy working on his next recording, which is also being shepherded by Tamir. After accomplishing so much and having a rich life full of achievements, Bill is more fulfilled than ever and is sure to have a growing number of fans who have been exposed to the music of this wonderful talent.